The path of the Mevleviyya is the path of Hz. Pir, the great scholar and writer Maulana Muhammad Jalaladdin Rumi (1207-1273), who himself was trained in the tradition of his father, Bahuddin Veled, a Sheikh in the Kubreviyya. 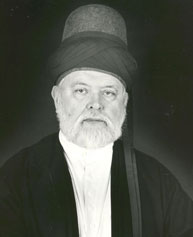 Today’s Kubrevi-Mevlevi Tariqa is headed by Sheikh Abdullah Halis Efendi, a native German who received many years of broad and intensive training in the Orient, where he also served as a Qady (judge), before returning to the West. His teacher, the honourable Sheikh Mustafa Kemal al-Maulavi from Aleppo, Syria, gave him the task of re-establishing traditional Dervish training, and Sheikh Abdullah Halis Efendi teaches in the traditional way of the Aleppinian branch of the Mevleviyya. This tradition is considered to be most complete.

Sheikh Abdullah Halis Efendi resides at the Kubrevi-Mevlevi Tekke (convent) in Trebbus, Germany, close to Germany’s capital Berlin. Traditional Dervish training is offered, at the Tekke, including the 1001-day retreat. Each mureed (student) works towards becoming transparent to him- or herself, gaining self-knowledge. It is a process also termed „purification of the heart“.

The Kubrevi-Mevlevi Dervish community consists of men and women of all ages and many professions, and from a variety of cultural backgrounds. Some live at the Tekke, others live further away. Regional groups currently exist in Roderath (near Cologne), Bremen, Hamburg, and Berlin. All of Sheikh Abdullah’s mureeds are united by a strong and long-term commitment to the quest for self-knowledge, as well as by daily practices such as prayers and Evrad (litany). They also meet regularly for Dhikr and other practices, such as music-making, or reading and studying the writings of Hz. Pir.

In their individual training on the Sufi path, all mureeds receive guidance and supervision.

On-site seminars and Distance Learning opportunities are offered, and some of these are also open to non-muslims who would like to acquaint themselves with the foundations of the Sufi path.

Educational and social services form an important part of the Kubrevi-Mevlevi Tariqa. Counselling and training for muslim individuals and families, as well as information about Islam for anyone interested, are provided, thus serving the aims of understanding and integration.

Visitors of any age (including children) and denomination are welcome. A charming, moderately priced guest house invites anyone seeking recreation, rest, or retreat in a quiet place. 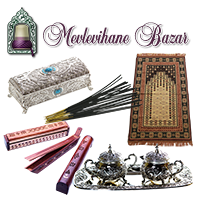